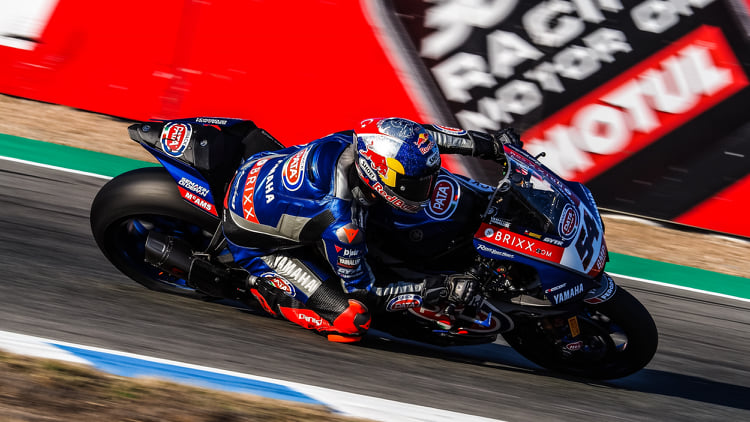 Published on September 26, 2021
By Dawn Hammersley

Toprak Wins At Jerez, Taking His Ninth Victory Of The 2021 season.

Yesterday’s Race was cancelled due to an unfortunate accident that took place in the World Supersport 300 race, very sadly Dean Berta Viñales lost his life in the incident, we send our deepest thoughts to his family, friends and The Vinales Racing Team.

Loris Baz is replacing the injured Chaz Davies, Chaz announced his retirement from the World Superbike Championship this week. Eugene Laverty is standing in for Tom Sykes on the BMW M 1000 RR. Race One will be run over 20 laps and there will be no Superpole Race this weekend.

PATA Yamaha’s Toprak Razgatlioglu was on Pole, with Kawasaki’s Alex Lowes in second and Jonathan Rea in third. As the lights went out it was Toprak who led the pack into Turn one, Ruben Rinaldi split the two Kawasaki’s up and took third place from Lowes.

Rea took the lead at Turn eight, Andrea Locatelli was up to third. Scott Redding was in fifth, Lowes had been pushed back to eighth. Honda’s duo Leon Haslam and Alvaro Bautista were in sixth and seventh respectively.

By the third lap Scott was on the move and was in fourth place, the leading duo weren’t getting away from the pack. Rinaldi crashed out at Turn three on lap five, Bautista passed his team-mate Haslam and was in fifth place. Toprak made a move on Rea on Turn six, both riders touched but managed to stay aboard their machinery, Rea held onto first place, but the incident enabled Locatelli and Redding to close in on the leading pair.

At the half-way mark Rea managed to make a slight gap between himself and Toprak, Rea was pushing to the limits to get away from the Turkish rider. The two top championship contenders dropped the rest of the field with eight laps to go. On lap 14 Toprak made a late move on Rea and took first place, Toprak wasn’t giving Rea any room to attack and fight back for first place.

Toprak stamped his authority on the championship and took the race victory, Rea was second and Redding finished in an important third place. Toprak now leads the championship by just six points from Jonathan Rea, what will be the points gap after Race Two?