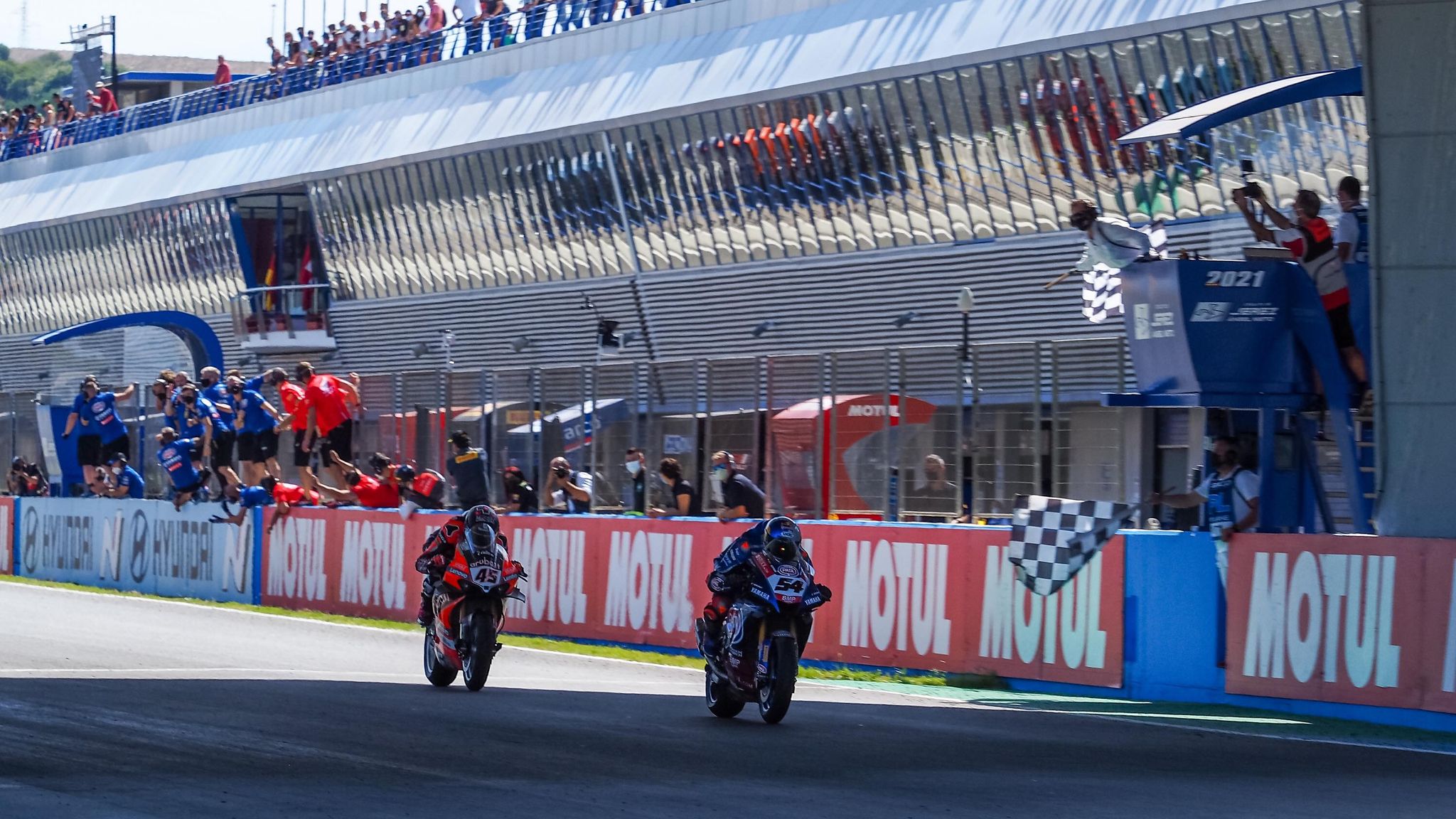 Published on September 26, 2021
By Jack Hammersley

It was very high track temperatures of 46 Degrees Celsius and was rising, these track temperatures were similar to those at Navarra. All riders were on the A compound rear tyre, but for the front row there were different front tyres in use. Toprak Razgatlioglu went with the harder C compound front whereas Johnathan Rea and Scott Redding went with the softer B compound front. Alex Lowes had pulled out due to his wrist injury.

The lights went out and it was Toprak who lead into turn one ahead of Rea with Rinaldi in third, Locatelli had moved into fourth and Redding had dropped to fifth. Toprak went wide at turn five allowing Rea to slip up the inside, it was then three abreast between Rea, Toprak and Rinaldi. Toprak out-braked Rea into turn six and Rinaldi was able to go underneath Rea. As they ended lap one it was Toprak in first with Rinaldi in second, Rea in third and Scott Redding moving up to fourth.

Alvaro Bautista had managed to get the best of his team-mate Leon Haslam to go into sixth position. There was also a battle between the two satellite Ducati’s of Axel Bassani and Loris Baz with Bassani being in-front of the Frenchman.

On lap three Rea ran wide into turn six trying to stay ahead of the Ducati of Scott Redding allowing the Brit to pass Rea and move into the podium positions. This was becoming a nightmare for the six time World Champion. One lap later and Rea was beginning to look vulnerable to Toprak’s team-mate Andrea Locatelli for fifth place with Alvaro Baustista and Axel Bassani were closing up on them.

At the front the two Aruba.it Ducati’s were putting Toprak under pressure with Scott Redding looking the strongest out of the three. Then on lap six Rinaldi ran wide into turn six with Scott able to pull alongside but Rinaldi held off his team-mate into turn seven. Redding then was able to pass Rinaldi into the final corner, but that battling had cost Redding a bit of time to Toprak.

On lap seven Locatelli was able to make his way through on Rea into turn 13 and he now had Bautista and Bassani to contend with. Bautista then attacked Rea into turn six and Bassani looked to get passed Rea too, but the gap was too small. Scott Redding had closed the gap down to 0.4 seconds to Toprak and was scouting the Turkish rider out to see where he could make his move.

The battle for third place was hoting up on lap 13 between Rinaldi, Locatelli and Bautista with Bautista making a couple of mistakes at turn one and six. On lap 14 Locatelli out-braked Rinaldi to go into the final podium place. Then on lap 15 Bautista replicated Locatelli’s move on Rinaldi and moved into fourth place.

Johnathan Rea was able to passed Rinaldi for fifth, for a crucial extra point. Meanwhile at the front Redding was all over the back of Toprak and couldn’t find a way passed, but Toprak ran a little bit wide at turn eight and Scott slipped through and was able to take the lead of the race.

Toprak fought back at turn 13 as they started the penultimate lap of the race. Also Bautista did an identical move as Toprak and passed Locatelli for third place. At the front it could prove a pivotal point in both riders championship. As they started the final lap Scott had a huge front-end slide into turn two which could cost the Brit the chance of victory.

Toprak Razgatlioglu won race two doing the double, holding off Scott Redding. Alvaro Bautista was able to take his frst podium finish in the longer races after taking a third place in the Superpole race in Catalunya. Andrea Locatelli finished in another fourth place and Johnathan Rea finished in fifth place, not where the Six Time World Champion would have wanted.

Toprak now leads the championship by 20 points over Johnathan Rea with Scott Redding being 74 points behind Toprak. They will now head to Portimao which had been one of Johnathan Rea’s strongest circuits in his career so he’ll be looking to close down the gap to Toprak.