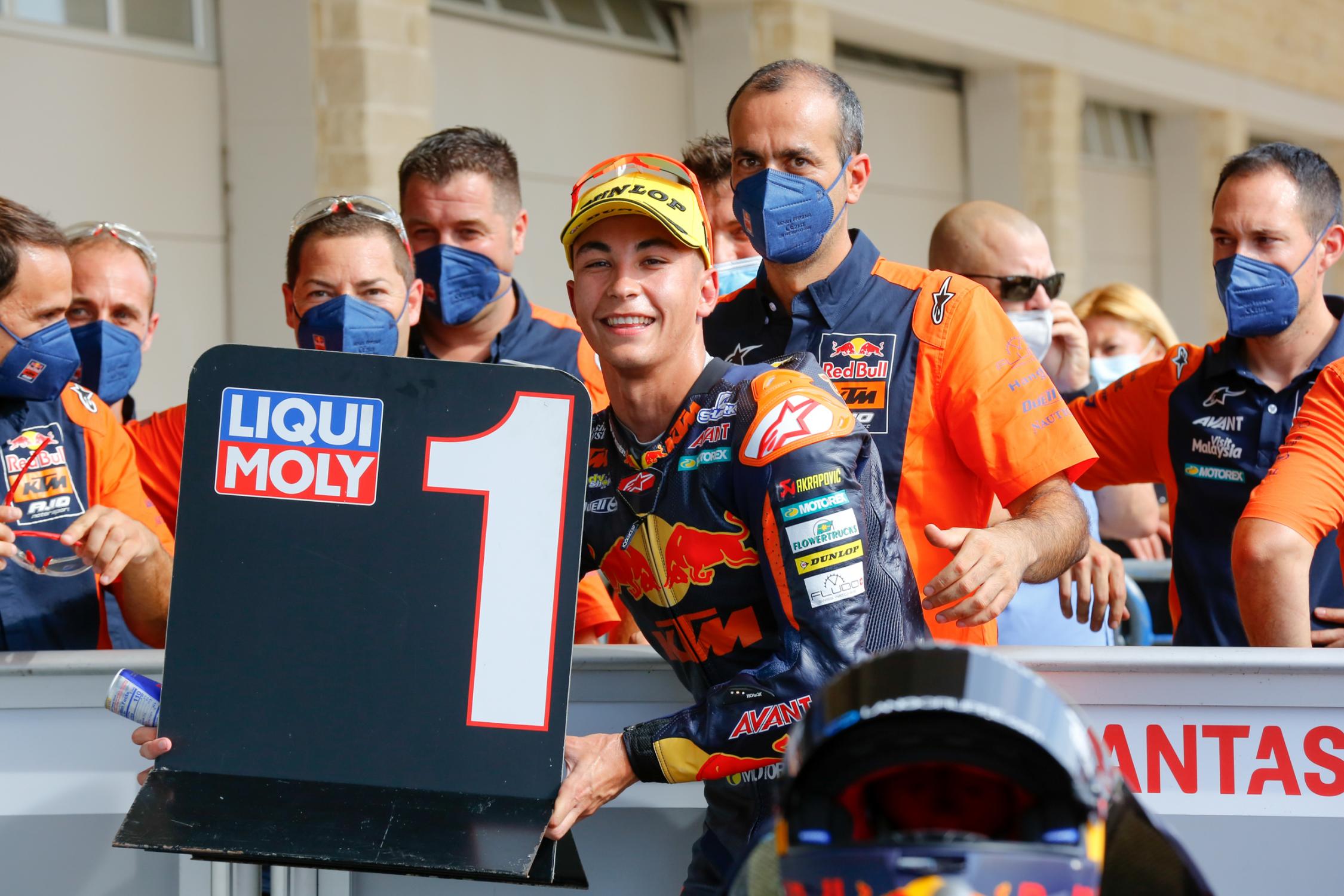 Moto 2: Raul Fernandez Wins the US Grand Prix at the Circuit of the Americas as Remy Gardner Crashes Out

It was sunny blue skies in Austin Texas as the two championship leaders headed the grid, it would surely be between those two for the victories with home rider Cameron Beaubier starting in fifth.

The lights went out and Cameron Beaubier took the holeshot into turn one but ran too hot and Raul Fernandez took the lead ahead of Gardner and Di Giannantonio, Marco Bezzecchi was fourth and Beaubier was fifth. Down the back straight they all went and Beaubier went passed Bezzecchi into fourth place.

At the end of lap one and Raul Fernandez was still in the lead with Gardner in second and Di Giannantonio in third, Beaubier was fourth but he attacked the two riders in-front moving into second place but Fabio was able to make his move and the Italian was second and the American was third, Gardner was forced to sit in fourth. Meanwhile Raul Fernandez was running away with the lead.

Gardner was able to pass Beaubier and was now looking to retake Di Giannantonio for second. Fabio then had a front-end moment on the bumps at turn 15 giving places to Gardner and Beaubier. Marco Bezzecchi was in fifth but was struggling to hold on. Now that Remy was in second, could he close the gap to his team-mate of 1.2 seconds.

Onto lap four and the crowd went wild at turn 12 as Cameron Beaubier overtook Remy Gardner to take second position, but it was short lived as Remy went up the inside of the home rider at turn 15. Beaubier then had a big moment on the front at turn 11 and the American dropped down to fifth place with Bezzecchi now looking fast and eager to get into the podium positions.

Tony Arbolino was having a great ride in sixth place and was beginning to close up on the battle for the podium ahead. Then on lap six Remy Gardner crashed at turn 15, folding the front and that was his first dnf of the season. It was only Remy’s second crash of the season.

On lap nine Tony Arbolino made his move on Beaubier into turn 12, but he didn’t hold it for long as Beaubier took the position back at turn 13. Sam Lowes was having a disaster of a race and he retired at the end of lap nine. Augusto Fernandez had made his way through on Arbolino in the second sector at turn 11 and he was now putting Beaubier under pressure.

Augusto was able to make his way passed Cameron at turn 20 and was now into fourth place. Fabio Di Giannantonio was trying to close in on Raul Fernandez with the gap fluctuating at 1.6 to 1.9 seconds.

With four laps to go, there was a battle for the last top ten place between Jake Dixon and Celestino Vietti which was ended prematurely as Vietti crashed out at turn two, a disappointing end to what was a good weekend for the rookie.

Raul Fernandez was able to hold off Di Giannantonio to take his seventh win and close down the championship lead to just nine points behind Remy. Fabio Di Giannantonio finished in second, his first podium since his victory at Jerez in May and Marco Bezzecchi took the final podium spot keeping his championship alive. Augusto Fernandez crossed the finish line fourth and Cameron Beaubier took his first top five finish in Grand Prix racing at his home Grand Prix.

Tony Arbolino finished in sixth place, Ai Ogura was seventh, Xavi Vierge was in eighth, Marcos Ramirez made it two American Racing bikes inside the top ten, and Jake Dixon was tenth which was his best race since Qatar. Aron Canet ended in 11th, Jorge Navarro was 12th, Simone Corsi in 13th, Somkiat Chantra in 14th and Bo Bendseyder taking the last points finish.