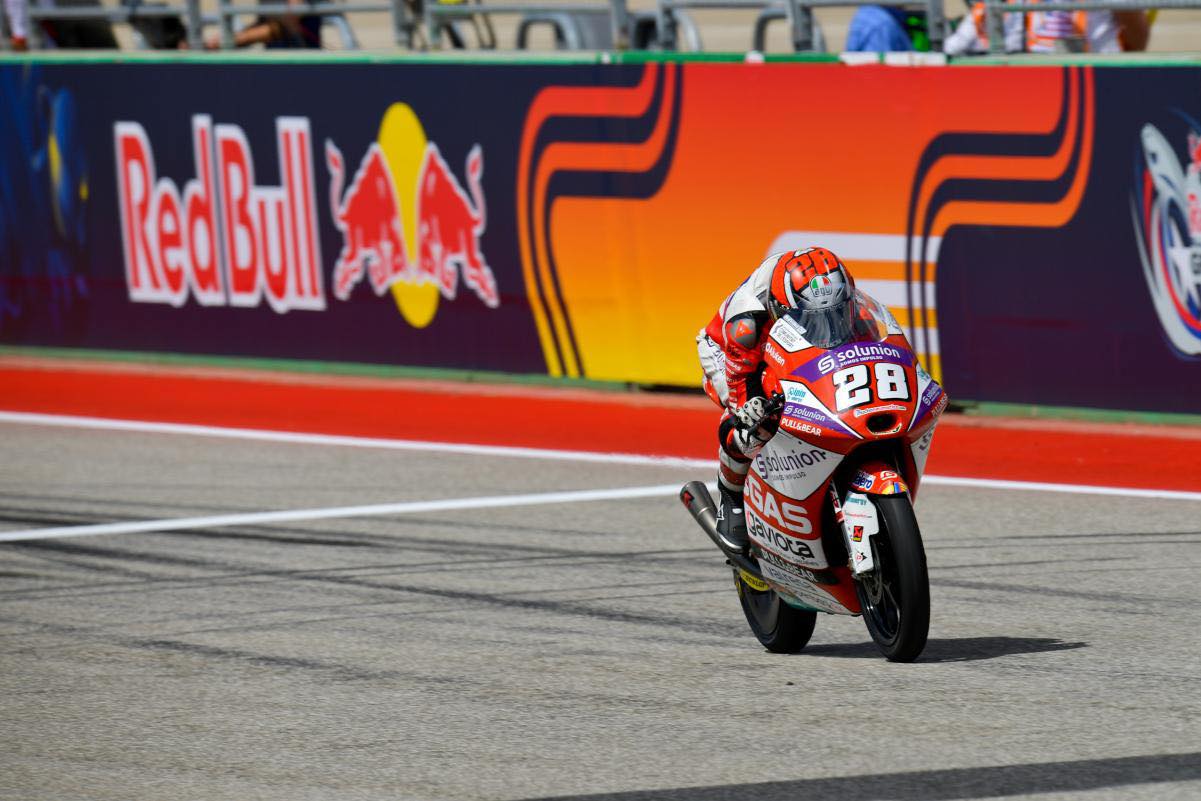 Moto3: Izan Guevara wins in amongst the carnage

Izan Guevara wins in Austin after the race was stopped twice following two separate incidents. Dennis Foggia closes the gap at the top of the championship to 30 points.

Jaume Masia lined up on pole with Dennis Foggia and Jeremy Alcoba joining him on the front row. Pedro Acosta was staring on the fifth row so had a lot of work to do. The grid was without Sergio Garcia due to his kidney injury and Gabri Rodrigo.

As the lights went green, the Moto3 pack charged up the steep climb to the tight hairpin of Turn one. A phenomenal start from Xavi Artigas but he wet wide and allowed Jaume Masia back through. Izan Guevara slotted into third. Acosta stayed out of trouble but didn’t make up any positions. Artigas moved into the lead after Jaume Masia got out of the seat going onto the back straight and Guevara also made his way past. Artigas was then awarded a penalty for a jump start, so had to take a double-long lap penalty.

Going into Turn five on lap two, Izan Guevara moved into the lead and there was now a breakaway group of four riders, with Dennis Foggia pushing hard to bridge the gap. Artigas immediately took his first long lap penalty and dropped to 13th. Acosta was up to 11th at the end of Lap two.

Dennis Foggia had clawed the gap back at the end of Lap three to the lead trio. The two Petronas Sprinta riders of Darryn Binder and John McPhee were racing hard in seventh and eighth, swapping positions in the second group of riders. Xavi Artigas took his second long lap penalty on lap four and re-joined back in 15th. He could now start to settle into his race and he looked to have pace. There was now a lead group of 11 riders.

On lap five, Darryn Binder started to look racy. He took fpur riders at the end of the back straight after dropping to 10th. Pedro Acosta moved into ninth behind Stefano Nepa. A gap appeared after a bold move which broke up the group. John McPhee steamed into second on Lap six which allowed Guevara to escape at the front. Dennis Foggia made his way back into second and the group settled down for a few corners.

On Lap seven, there was a nasty looking crash at Turn 11. Filip Salac was laying in the track along with his bike. Salac was moving but the doctors tended to the Czech. Pedro Acosta was given a track limits warning on lap eight. The race was then red-flagged due to Filip Salac’s accident. Salac was stretchered off after the red flag. Niccolo Antonelli was on the floor but got up to return his bike to pitlane and make the restart.

Due to 2/3 distance not being completed, the quick-restart procedure was employed and it was declared a five-lap dash to the end.

As they lined up on the grid, Yuki Kunii finished his dismal weekend off by stalling at the back of the grid. As his bike was wheeled off, the lights went out for the second start of the day and Deniz Oncu and Jaume Masia collided off the line and Guevara got out of Turn one first. Oncu looked aggressive into Turn four and forced his way into second. Acosta and Artigas collided out of Turn 14 in ninth and tenth but both stayed on.

Adrian Fernandez and Max Kofler were involved in an incident at the end of the first lap. Darryn Binder was up 15 positions into second at the end of the back straight. Izan Guevara lost the front into Turn 13, went wide and was out of the race. It later emerged; his rear shock had failed and he was clearly upset as he returned to the garage. He kicked every object in sight and showed his displeasure with the bike failing on him. John McPhee was in the lead with three-laps to go. Darryn Binder was in third. There was now a lead group of nine riders.

With three-laps left, all hell broke loose on the back straight. Deniz Oncu weaved across the straight, caught the front wheel of Jeremy Alcoba – at full speed – half-way down the straight. He went down and Andrea Migno went airborne over Migno’s bike. Migno’s bike slid across the track and wiped-out Pedro Acosta who went over the top of the bike and was inflight, onboard his bike for a good 60 metres at 130mph, slid across the tarmac, onto the grass and into the barrier. Everybody feared the worst, but the cameras showed all three riders up and discussing the incident. Absolutely incredible nobody was injured in one of the biggest and scariest accidents in recent times. With stricken bikes across the track, the race was red-flagged again. As Acosta arrived back to his garage, there were hugs all round for the youngster and it was clear to see relief in his team. Andrea Migno looked shell-shocked and sat in the corner of his garage looking rather pale.

Oddly, the result was declared from before the first red flag. Izan Guevara was declared the winner after dropping out. Dennis Foggia was given second. John McPhee was awarded third. Jaume Masia was fourth ahead of the man that caused the second red-flag, Deniz Oncu. Jeremy Alcoba was 6th from Darryn Binder and Pedro Acosta. Tatsuki Suzuki was ninth ahead of Andrea Migno in 10th. Full points have been awarded.

Filip Salac has been taken to hospital for scans on his chest and abdomen. The medical team confirmed he was conscious after the crash.

Absolute chaos at the end of a chaotic race but Pedro Acosta’s ninth place finish has closed the championship gap to just 30 points between him and Dennis Foggia. It’s all to play for going into the final three rounds.