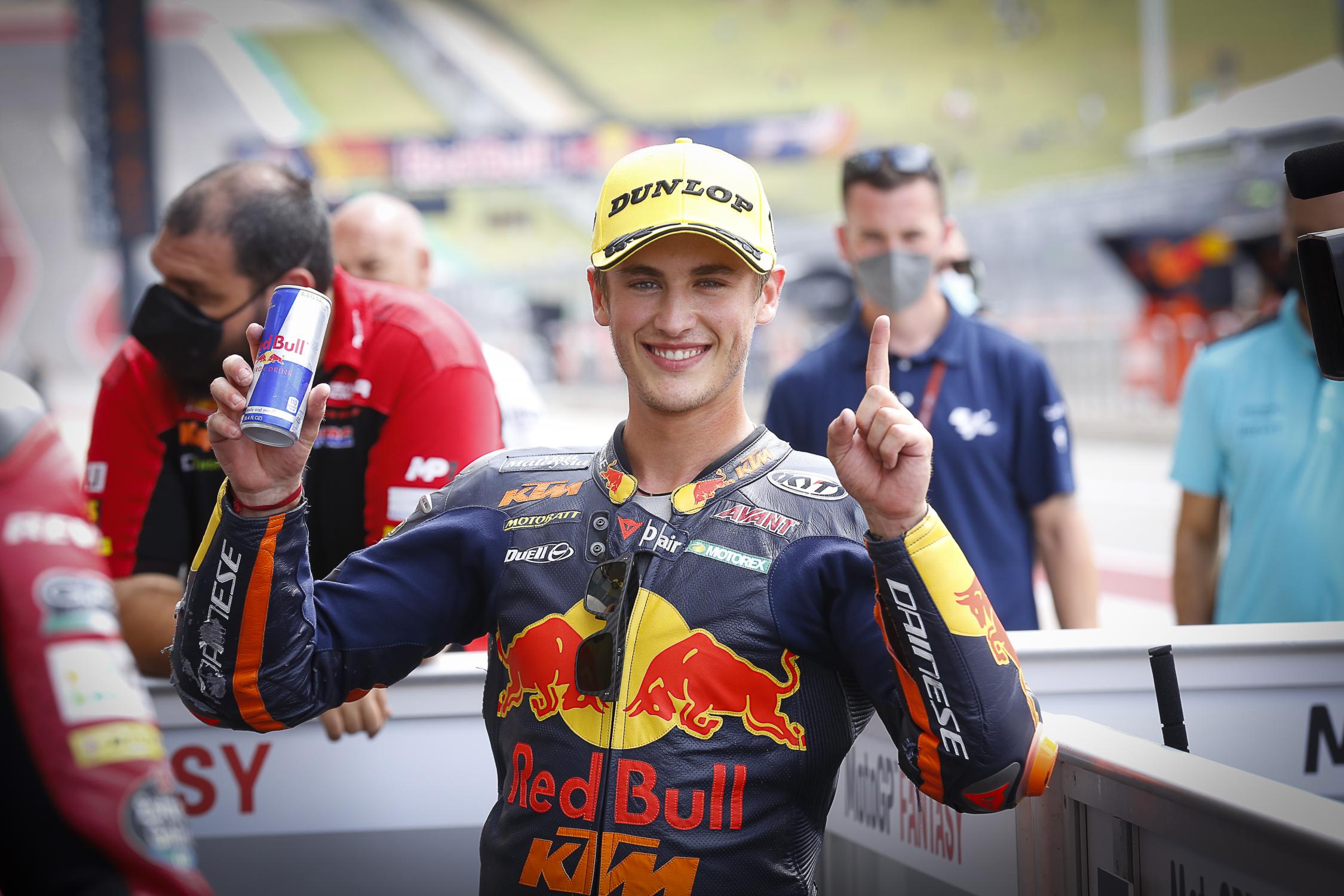 MOTO3: Masia on pole in Austin

Jaume Masia takes pole in Austin with his championship leading team-mate staring deep in the pack for tomorrow’s race.


This week, the windy and long lap of Circuit of the Americas in Austin, Texas. Not one of the favourites of the riders after complaints regarding the surface and its bumpiness.

Sergio Garcia will take no further part this weekend after a crash yesterday, and bruising his kidneys, so you have to think his championship chances have faded.

Q1 started with overcast skies as rain is expected for most of the weekend, but the track was dry so the riders hit the track as soon as the lights at the end of pitlane went green. Both Petronas Sprinta Moto3 riders in Darryn Binder and John McPhee started in Q1 along with Kaito Toba, Carlos Tatay and youngster Alberto Surra – all of which looked strong to go through into Q2.

The first crasher was Frenchman Lorenzo Fellon. He was riding around the outside of Ryusei Yamanaka at Turn 13 after he stuffed it up the inside to latch onto the back of the Petronas riders and Yamanaka caught the handlebar of the SIC58 rider, sending him down the road on his out-lap. Carlos Tatay also went down at Turn nine on his first flyer. As he came over the crest at Turn nine, the forks bottomed out which flicked the rear out and threw him over the top onto the floor. He looked a little bit winded after his face full of dirt, but he managed to get the bike back to pitlane.

The Petronas pair were working together from the off. First Darryn Binder was the lead and went top after the first quick laps, but they needed to be quicker if they were to go through, and they were quickly knocked off the top by Kaito Toba. John McPhee started to get into a rhythm and knocked Toba off the top, with Max Kofler dropping into second. Lorenzo Fellon was the next to top the sheets, demoting John McPhee to second.

With a minute left of Q1, the group of McPhee, Binder, Fellon and Kofler followed each other around but the first three of those riders dropped down pitlane before the chequered flag was out. Carlos Tatay managed to get himself into fourth after his accident, but that was short-lived as Rivacold Snipers youngster Alberto Surra knocked squeaked into the top four. Lorenzo Fellon, John McPhee, Darryn Binder and Surra were safely through to Q2.

There were ominous clouds floating around at the start of Q2, but the Texas sun was out. All riders headed out onto the track in a big group apart from the man who prefers to do it alone, Romano Fenati. He exited the pits around a minute and a half later.

Pedro Acosta had a moment into Turn one on his first quick lap. The front tucked but he kept pushing out of the corner. Jaume Masia was just in front of him on track and also had a moment, a couple of corners later, popping out of the seat but he carried on pushing to drag his team-mate along. The first quick man was Dennis Foggia and Izan Guevara was in close attention in second. Jeremy Alcoba topped the sheet early on though, tucked in behind Foggia, and it turned out to be the perfect tow.

Romano Fenati had a moment exactly the same as Carlos Tatay in Q1 but managed to let the bike sort itself out underneath him to continue his lap unharmed.

Foggia went back to the top with five-minutes remaining as the two Red Bull KTM Ajo bikes came into the pits to swap the tyre. Acosta looked animated but his manager Aki Ajo was clearly calming him to get out and do what he does best.

Pedro Acosta looked like he was struggling on his last flyer, and couldn’t really pull time after a very slow first sector. Pedro Acosta stayed 14th but Jaume Masia, tucked in behind Acosta to go to the top. This didn’t look like it was part of the plan and the Red Bull KTM team must have been unhappy.

There were no more impprovers at the end of the session, so Jaume Masia took pole from Dennis Foggia in second and Jeremy Alcoba completing the front row. Izan Guevara, Xavi Artigas and Tatsuki Suzuki were on row two with Filip Salacm Andrea Migno and Deniz Oncu on row three. John McPhee starts in 10th but Pedro Acosta has it all to do from 15th. He will be deep in the pack into the very tight first turn so it will be a hard task to stay out of trouble.

With a potential of rain tomorrow along with a less-than-ideal surface, the race is hugely unpredictable and is set to be fascinating to watch.