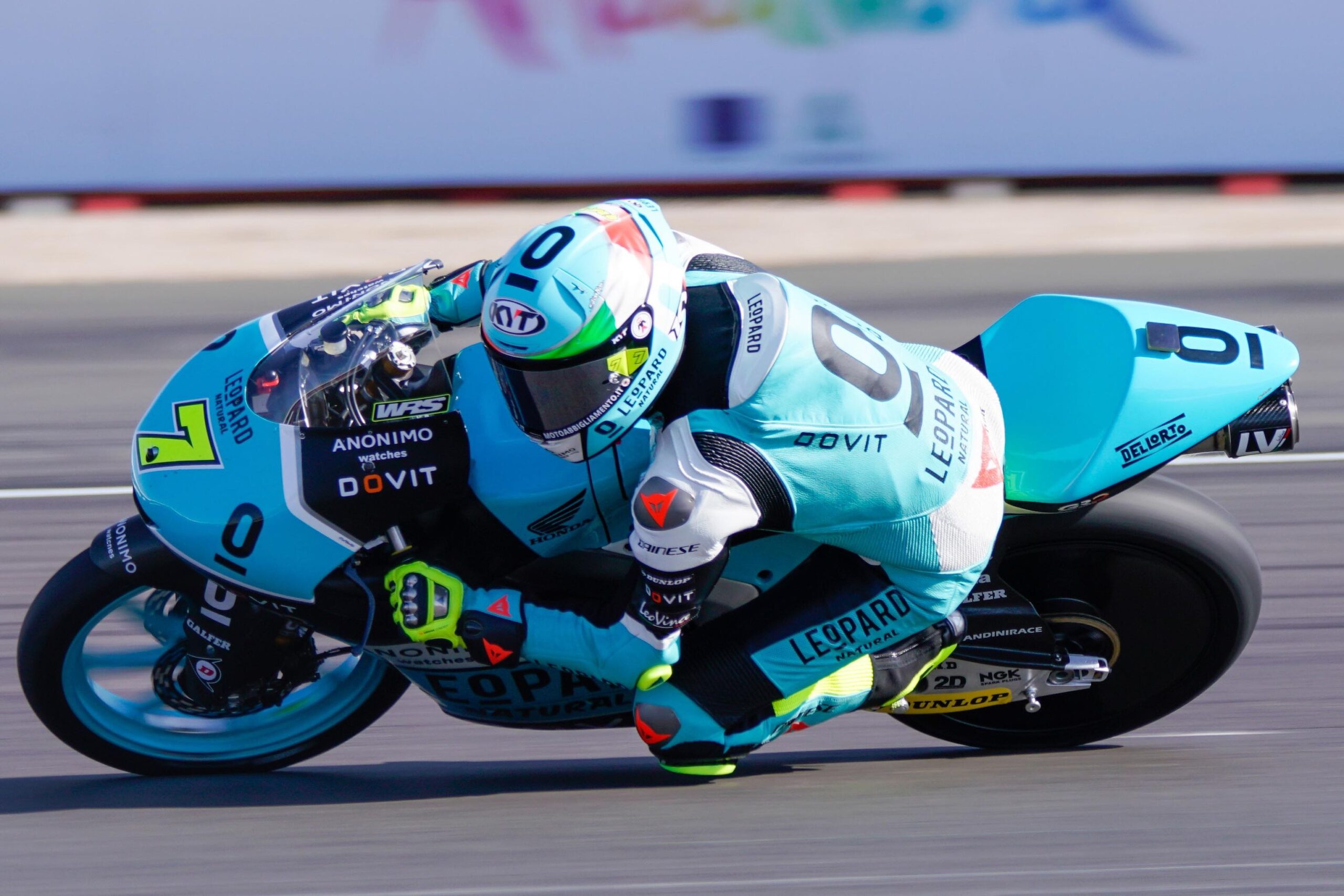 Published on August 7, 2022
By Dawn Hammersley

Dennis Foggia Wins A Dramatic British Grand Prix And Closes The Gap To The Championship Leaders.

The Moto3 championship were back in racing action after a five week summer break, the Northampton circuit of Silverstone was hosting The British Monster Energy Grand Prix round. MT Helmets – MSI’s Diogo Moreira was on pole position for the first time this season, Gaviota GASGAS Aspar’s Izan Guevara was in second place with Ryusei Yamanaka in third place.

Moreira got the holeshot into Copse, Guevara took the lead at turn two Maggotts. Deniz Oncu was up to fourth place with Suzuki on his rear wheel. John McPhee was in tenth place, Scott Ogden was in 22nd place with team-mate Josh Whatley in 25th place.

Oncu made his way to second place, Sasaki made a launch under Oncu for second place! Dennis Foggia was in sixth place trying to make a pass on the pole man Moreira. Guevara was still leading the pace at the front with 15 laps to go.

The opening group consisted of seven riders, Suzuki took second place but Oncu wasn’t giving up on the second place and retook the position at Village. Scott Ogden was inside the top 20 in 19th place. McPhee was in fifth place and on the move.

Both Oncu and Suzuki were challenging Guevara for the front spot but the Spanish rider wasn’t giving up the lead. The championship leader Sergio Garcia was in seventh place, Foggia took the lead at Village, the lead was short lived as Guevara retook first place. The front group now consisted of 20 riders.

With 12 laps to go Foggia was back leading the race with his team-mate Suzuki in second place. Foggia made a mistake at Brooklands and lost his position and was pushed back to fourth place. Two laps later and it was Oncu who was leading, the scrap for second place was fierce!

Foggia made his way back to first position, Oncu and McPhee were banging elbows for second place. With nine laps to Foggia managed to put a slight gap in from the rest of the field, Guevara was down in 11th place just behind McPhee, David Munoz joined the party in fifth place. The fastest rider on track was Ivan Ortola in fourth place.

Oncu took the lead with six laps to go, Foggia took back the lead a lap later at the exit of Copse. Oncu gathered his composure and was back leading the race with just four laps remaining, Foggia got shuffled back to eighth place.

Sasaki and Garcia had a coming together at Village with three laps to go, both riders crashed out of the race! 11 riders were fighting for the British Grand Prix win with a lap and a half left. Foggia was leading at the Hanger Straight, Guevara and Ortola had a coming together and both riders went down! Suzuki crashed out on the final lap and so did Munoz.

Foggia has closed down the gap in the championship with Garcia and Guevara crashing out of the race.