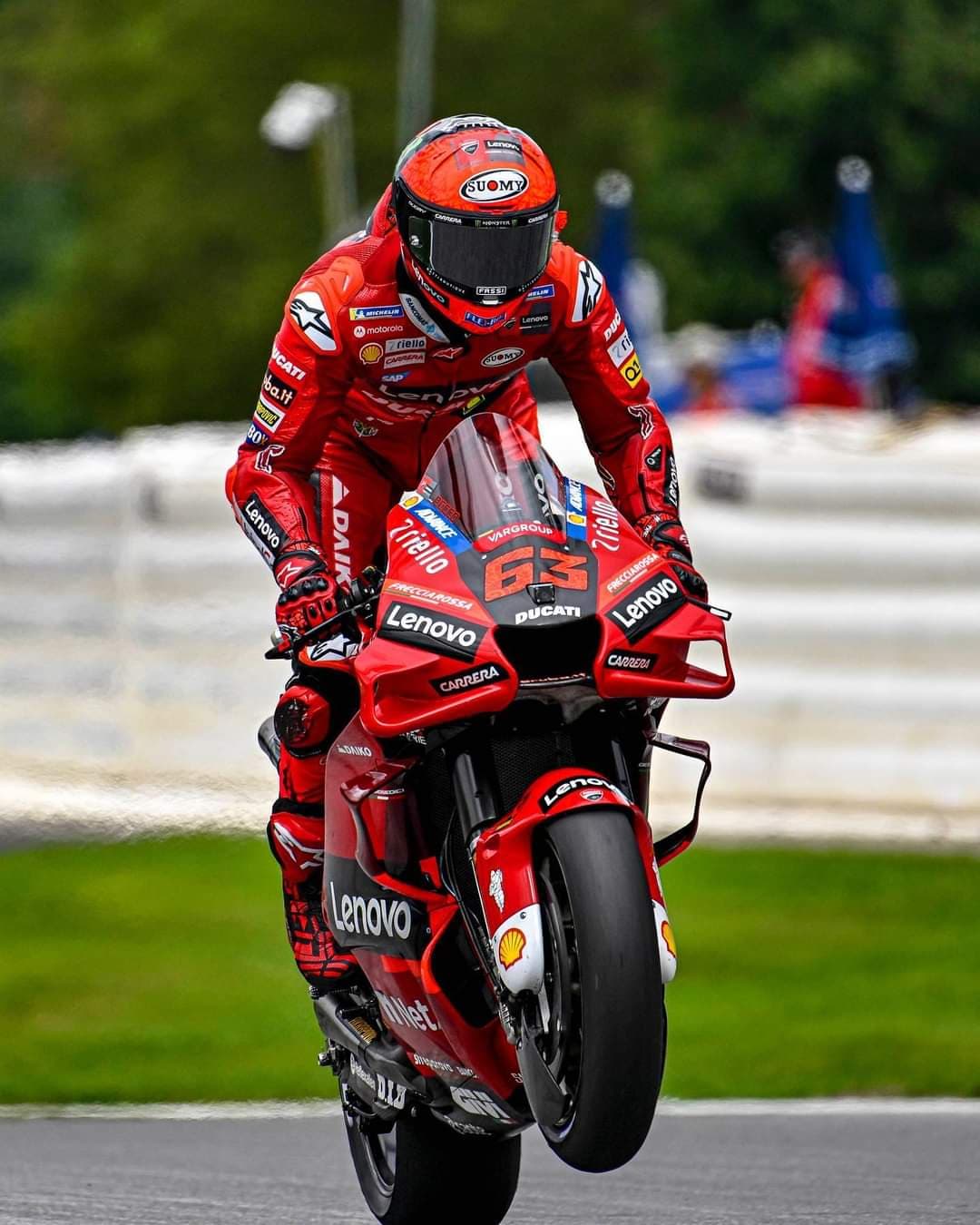 Published on August 21, 2022
By Jack Hammersley

Pecco Bagnaia wins his third race in succession with Fabio Quartararo limiting damage in the championship.

It was cloudy conditions at the Red Bull Ring with a range of tyre changes on the grid with both tyres being changed with mixes of softs, mediums and hards being used; Pecco Bagnaia was on the soft front where as Fabio Quartararo was on the hard. Enea Bastianini headed an all Ducati front-row with Bagnaia and Jack Miller joining him, Quartararo was in fifth in a Prima Pramac Ducati sandwich.

The lights went out and it was Bagnaia who took the holeshot with Bastianini and Miller behind, Joan Mir crashed out of the race at turn five, his sixth crash of the season. Maverick Vinales passed Quartararo into turn nine and held off the Frenchman.

Aleix Espargaro fell back to eleventh on the opening lap, but managed to make his way back up into seventh by the end of lap one.

It was a Ducati one-two-three-four with Jorge Martin just behind the front row runners and crucially was the only one on the hard front tyre with the rest in-front on the soft. On lap four Miller overtook Bastianini at turn three to move into second. Martin then took advantage of Bastianini’s disturbed rhythm by passing the Italian in turn seven, but the Gresini rider retook third at turn one on the following lap.

Vinales out-braked himself into turn four allowing Quartararo, Espargaro and Johann Zarco through. Martin and Bastianini continued to battle allowing the Factory Ducati’s to get away. Quartararo passed Bastianini at turn two and the Italian then suffered braking problems at turn three causing Zarco to sit-up and take avoiding action, Enea then ran straight on at turn four and was out of the race; Remy Gardner also crashed out at turn four on the same lap.

On lap seven Miller tried to pass Pecco into turn nine, but ran slightly wide and Pecco went back into the lead. Martin was closing in on the leading duo, setting the fastest lap of the race on lap eight.

At the halfway stage, Quartararo was closing in on the front three, making it a four-way train with Aleix lurking in the background slowly closing in too.

Martin out-braked himself into the chicane and had to drop behind Quartararo to avoid getting a long lap penalty and Fabio now had his sights on Miller.

On lap 20 both Aprilias were having rear tyre woes as both riders started to drop off the pace with Vinales dropping down to tenth and Aleix being put under pressure by Luca Marini who went through on the Spaniard on the exit of turn three and Luca was on for another top five finish.

On lap 25 Quartararo passed Miller into turn two on the change of direction and held off both Ducati’s down the straight, the gap was 1.7 seconds to Pecco in-front.

With one lap to go the gap was 0.8 seconds between Pecco and Quartararo, Martin tried to pass Miller into turn one but lost the front, but was able to rejoin in tenth place.

Pecco Bagnaia held off the late charge from Quartararo to take his third consecutive victory of the season, the first to do so on a Ducati since Casey Stoner in 2008 and the first since Marquez in 2019. Jack Miller finished in third place to take his fifth podium of the season.

Luca Marini took his best finish of his career in fourth place ahead of Zarco and Espargaro, Brad Binder took seventh place placing as the top KTM at their home circuit just holding off Alex Rins for eighth with Marco Bezzecchi and Jorge Martin rounding out the top ten.

Fabio Quartararo extends his championship lead to 32 points over Aleix Espargaro with Bagnaia 44 points behind. The Italian once again closes the gap, but Quartararo limits the damage.