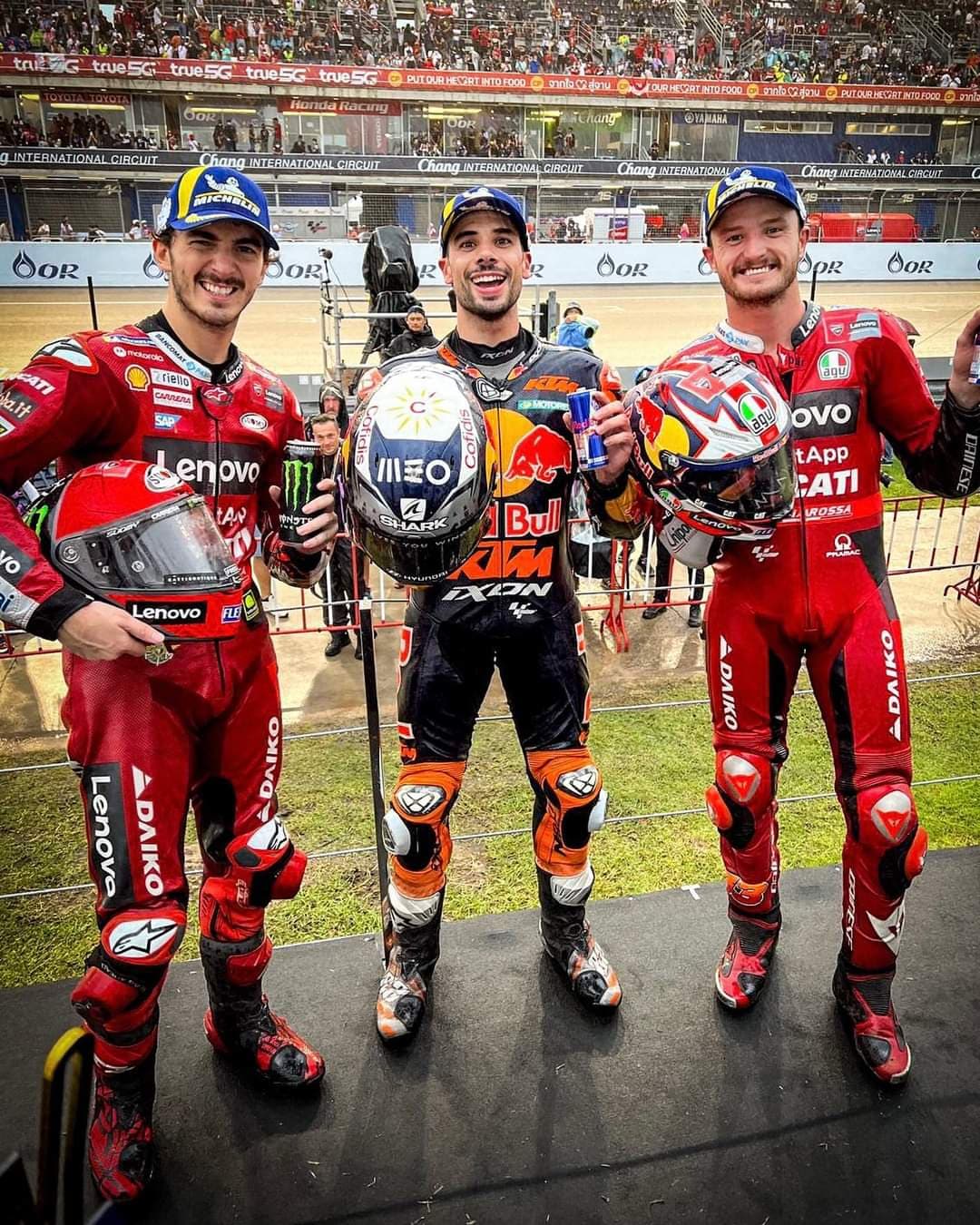 MotoGP: Miguel Oliveira Sails to Victory at the Thailand Grand Prix with Fabio Quartararo Out of the Points

Published on October 2, 2022
By Jack Hammersley

After a one-hour delay, the race was started and declared a wet race. Marco Bezzecchi started from pole ahead of Jorge Martin and Francesco Bagnaia. Fabio Quartararo was fourth with Marc Marquez in eighth.

The lights went out and it was Bezzecchi who took the holeshot going straight on at turn one after colliding with Martin, Pecco was in second place. Quartararo dropped to eleventh place, Alex Marquez went around the outside at turn four and that forced the pair of them onto the paint and Fabio dropped to 17th.

Aleix Espargaro ran into the side of Brad Binder into turn three on lap two, Bezzecchi was told to drop a position for gaining an advantage at turn one. Jack Miller moved into second place, out-braking Pecco into turn three.

Miguel Oliveira was the man on the move he’d moved up to fourth by lap three and set the fastest lap of the race. Luca Marini lost the front at turn nine, his first DNF in MotoGP.

Oliveira made a pass on Pecco into turn nine on lap five to move into third place and was eyeing up Bezzecchi. On lap six Miguel made the Mooney VR46 rider sit-up at turn three which caused the Italian to drop to fourth behind Pecco.

By lap eight the pace was settling, and it looked to be Miller and Oliveira for the win, Johann Zarco was recovering from his poor start and passed Alex Marquez for seventh place. Miguel out-braked Miller, but the Australian cut back and retook the lead.

Aleix was given a long lap penalty for the incident with Brad Binder. Franky Morbidelli was the top Yamaha in 12th, Crutchlow in 18th with Quartararo in 19th. Espargaro was 14th after his long lap penalty.

Bagnaia set the fastest lap of the race on lap ten; Remy Gardner crashed out at turn one from 16th place.

Oliveira took the lead at turn 12 on lap 14, Miller tried to fight back at turn three for the Red Bull KTM Factory Racing rider just held him off.

Marc Marquez and Zarco were closing in on Pecco, gaining over 0.7 seconds on Oliveira! With seven laps remaining it could be any of the top five’s race to win.

Zarco passed Marc at turn eight with five laps to go; he was looking to pass Pecco but couldn’t find a suitable place to pass.

Onto the final lap Oliveira still lead ahead of Miller, the Australian trying all he could to close down the KTM, but Miguel was too strong and crossed the line to take his second victory of the season. Miller took back-to-back podiums finishing in second place and Pecco held off Zarco to take his first full-wet podium.

Marc Marquez rounded out the top five, Aleix Espargaro was in 11th place with Fabio Quartararo finishing in 17th, Franky Morbidelli was the top Yamaha for the first time this season.

Quartararo continues to lead the championship but now his lead is only two points over Francesco Bagnaia, Aleix Espargaro is 20 points behind, the Ducati’s of Enea Bastianini and Jack Miller are 39 and 40 points behind.