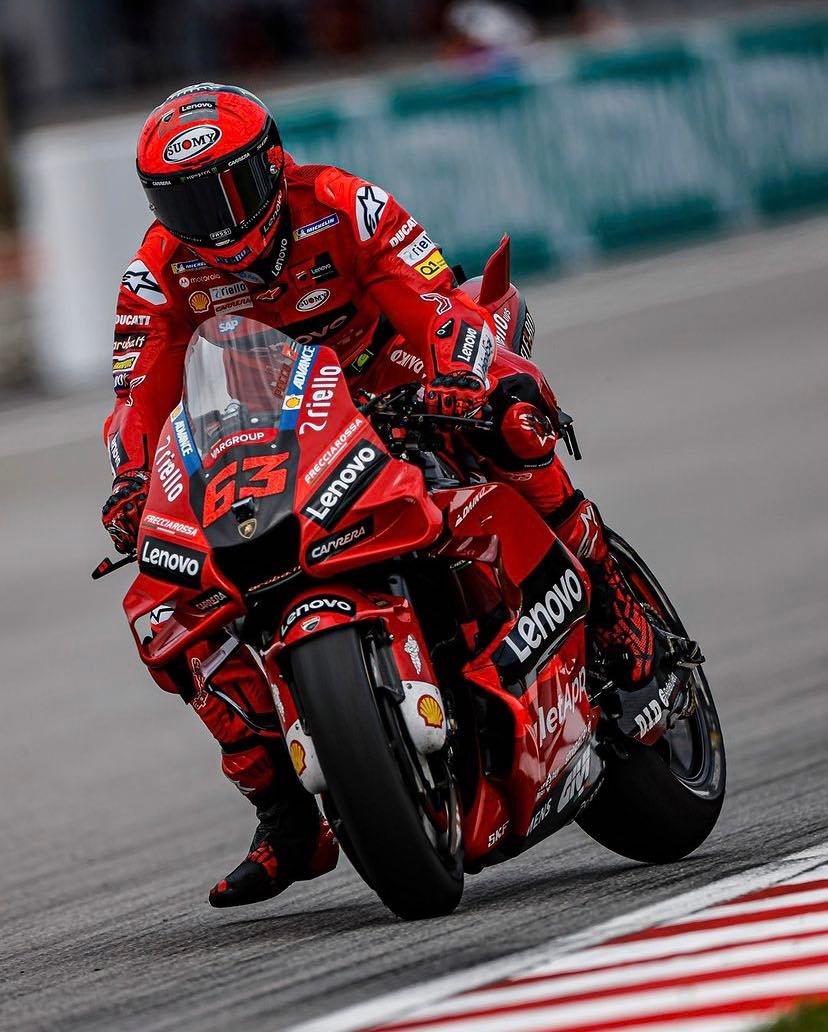 Published on October 23, 2022
By Jack Hammersley

It was cloudy conditions at the Sepang International Circuit with rain scheduled to arrive at the start of the race, the track was damp in areas, but the track conditions were good.

Jorge Martin started from pole position after setting a record settling lap time, he was alongside Enea Bastianini and Marc Marquez. Francesco Bagnaia started from ninth after a crash in qualifying, Aleix Espargaro headed the fourth row in tenth and Fabio Quartararo started from 12th suffering from a fractured third finger on his left hand.

Most riders went for the medium front soft rear tyre combination, despite the Malaysian Circuit being a high degradation circuit, the soft in theory would spin less, maintaining a better temperature and therefore generating less wear.

The lights went out and it was Jorge Martin who took the holeshot and Pecco Bagnaia was second! Quartararo was in sixth behind team-mate Franky Morbidelli who had two long laps to serve. Fabio passed the Italian into turn nine and moved inside the top five.

Bastianini was putting Pecco under pressure looking to try and pass his future team-mate, meanwhile Martin was pulling away. Luca Marini pulled into the pits and retired for the first time in MotoGP. Franky was having his best race of the season in sixth place.

El Diablo was right behind Marquez on lap four and was beginning to form a train with Morbidelli and the Suzuki’s. Franky took his first long lap and rejoined in tenth.

Quartararo turned his M1 Yamaha underneath the Honda at turn one on the fifth lap, the Frenchman had 2.4 seconds to close in on Bastianini.

On lap 7 Jorge Martin lost the front at turn five! Pecco was promoted into the lead of the race and crucially put Quartararo on the podium. Marco Bezzecchi had passed the Suzuki’s and Marquez and he had 1.6 seconds to catch-up to Quartararo.

On lap 11 The Beast passed Pecco into turn four and looked to try and pull away. Bezzecchi had closed the gap to 0.6 seconds to Quartararo.

Pecco retook the place at the final corner on lap 14, the Ducati bosses were moving up and down pitlane having a lot of discussions.

With four laps to go Quartararo was the man on the move, closing in on the two Ducati’s and was dropping Bezzecchi. He had 1.5 seconds to close in.

Onto the last lap Pecco lead over the line with Bastianini right behind him, Pecco went defensive into turn four, the next overtaking spot was turn nine. Enea ran a little bit wide at turn nine and that put an end to his hopes of winning.

Francesco Bagnaia crossed the line to win his seventh Grand Prix of the season, Quartararo finished in third to keep his title hopes alive. Marco Bezzecchi finished in fourth and Alex Rins was fifth. Jack Miller made a great recovery from to sixth place ahead of Marc Marquez, Brad Binder put his Red Bull KTM RC16 in eighth ahead of Johann Zarco and Franky Morbidelli took his first dry top ten finish of the season. However due to the overtake he did on Aleix Espargaro on the last lap, the Italian was demoted to 11th and Aleix into tenth.

The championship goes to the final round at Circuit Ricardo Tormo in Valencia, Pecco leads by 23 points over Quartararo, Fabio has to win at all costs at Valencia to win the championship. Ducati Lenovo Team also wrapped up the Teams Championship, that’s two out of three titles for the Italian Factory, just one more title awaits them.