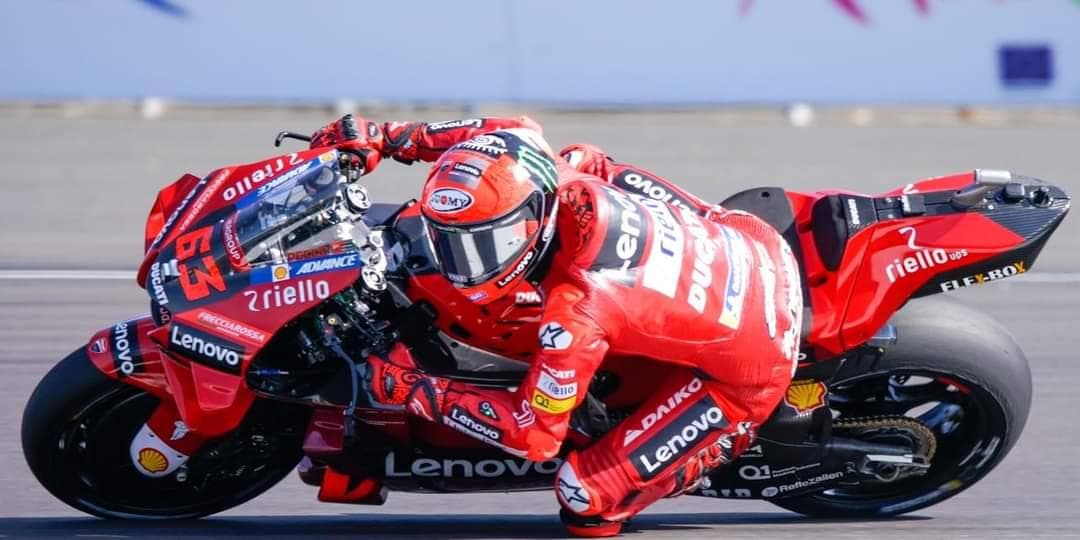 Published on August 7, 2022
By Jack Hammersley

Prima Pramac Racing’s Johann Zarco starts from pole position for the second time this season ahead of Maverick Vinales and Jack Miller. The three championship protagonists locked-out the second-row with Fabio Quartararo in fourth, Pecco Bagnaia in fifth and Aleix Espargaro in sixth who was going to have to fight through a lot of pain after a nasty highside at Farm corner in Free Practice Four.

The lights went out and it was Zarco who took the holeshot into turn one with Quartararo in second ahead of the two Factory Ducati’s and Alex Rins in fifth who came from 11th on the grid. Vinales overtook Rins at the Vale chicane to move back into fifth, but Rins then retook the place at the loop.

On lap three Rins went up the inside of Pecco at the loop to move into fourth place and the disturbed rhythm of Pecco allowed Vinales to move into fifth, but the Italian quickly took the place back.

On lap four Quartararo took his long lap penalty and dropped from second to fifth, just in-front of Vinales. It promoted Miller, Rins and Pecco up to second, third and fourth. Rins was on the move setting the fastest lap of the race and a new race lap record.

Zarco lost the front at the Vale Chicane, heartbreak for the Frenchman. Rins took the lead at the loop, which seemed to be his favourite passing place, but Miller turned the Ducati under the Suzuki and held onto the lead at Aintree.

Rins took the lead once again, but this time at the Vale Chicane and made it stick. Pecco was starting to look to make his way through as well as Jorge Martin who overtook Vinales at the loop and was looking to pass Quartararo, which he did at Stowe. Pecco took second place from Miller at the Vale Chicane and looked to try and stay with Rins.

Joan Mir was slowly progressing through the field, overtaking Aleix at the loop for seventh place. Vinales passed Quartararo down the Hanger Straight to move back into the top five.

By the halfway stage there was nothing separating the top five and they were beginning to pull a gap on Quartararo. Bagnaia passed Rins into Stowe to take the lead for the first time in the race.

On lap 13 Pecco was given a warning for exceeding track limits. Also Vinales passed Martin on the brakes into Village to move into fourth place.

Miller overtook Rins into Village and went defensive into the loop and moved into second place to make it a Factory Ducati one-two.

Joan Mir crashed out of eighth place at Stowe, his season just can’t get back on track. Martin re-passed Vinales at Aintree to get back into fourth.

Enea Bastianini who was missing his right aerodynamic fairing was the man on the charge and tried to pass Quartararo at Copse, but ran wide and the Yamaha went back into sixth. The Gresini Ducati was able to pass and make the move stick on Quartararo at Brooklands. Vinales repeated his move on Martin from lap 13 and was back into fourth.

Quartararo was then falling into the clutches of Miguel Oliveira who passed him into Abbey but ran wide allowing Quartararo to move back into seventh.

Vinales and Martin made their way passed Rins on lap 17 and looked to try and challenge the two Factory Ducati’s for the win.

Vinales was then able to pass Miller into Village and set his sights on victory with two laps to go. Bastianini passed Rins for fifth and Oliveira passed Quartararo for seventh. Vinales attacked Bagnaia at Village but Bagnaia retook the lead.

Pecco Bagnaia held on to win the British Grand Prix to be the eighth different winner from the last eight British Grand Prixs. Maverick Vinales was second and Jack Miller rounded out the podium places. Bastianini took Martin at Brooklands to take fourth place and top independent rider. Oliveira was sixth, overtaking Rins on the Sir Lewis Hamilton straight to take sixth and Quartararo held off a last lap attack from Alexi Espargaro to take eighth with Marco Bezzecchi rounding out the top ten, only 6.646 seconds off the win, the second closest top ten in history.

Fabio Quartararo extends his championship lead by one point over Aleix to extend his lead to 22 points, but Pecco closed down the gap by 17 points to 49 points, it’s a big gap between the top three but the championship is not over.