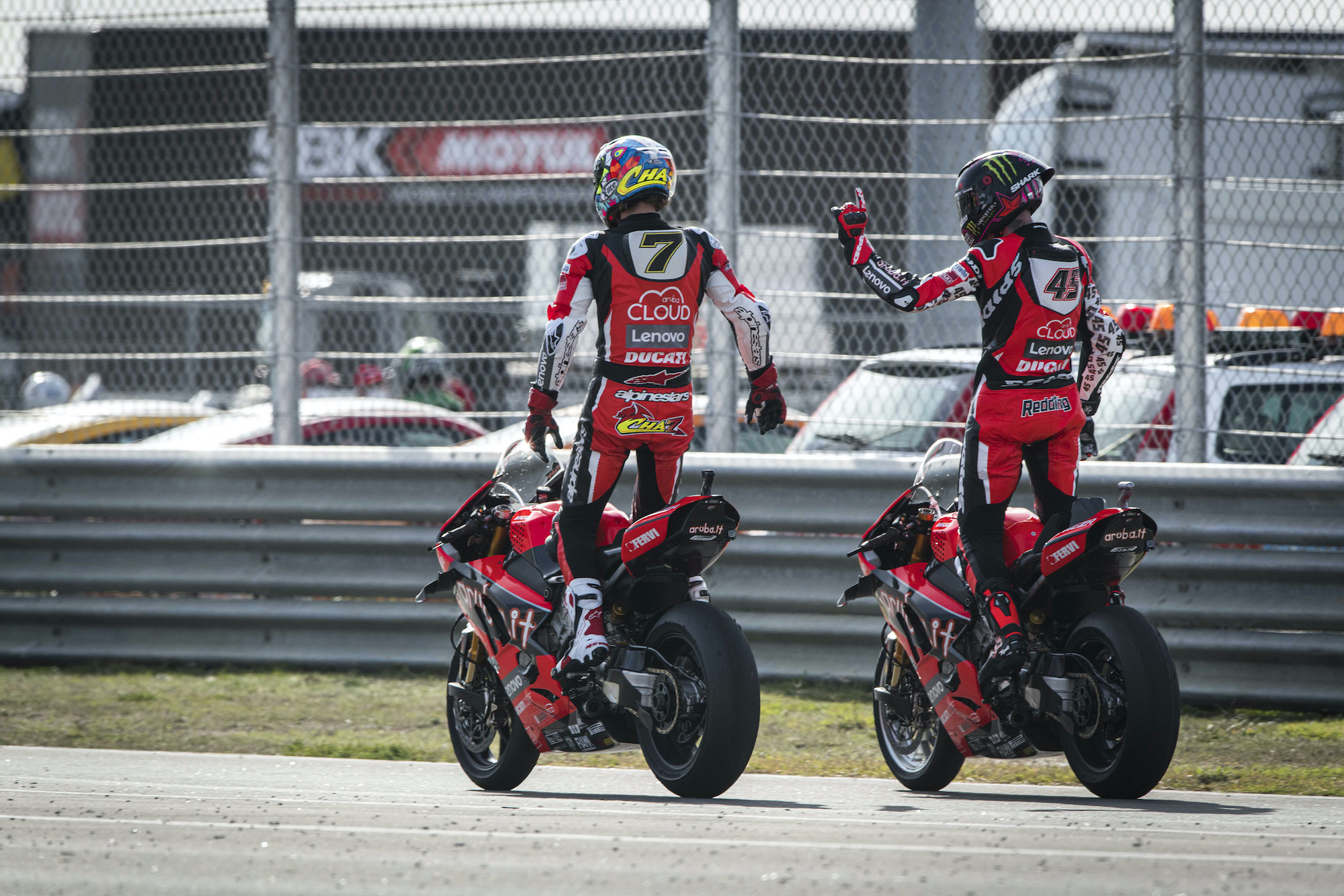 Published on October 18, 2020
By Jack Hammersley

Chaz Davies takes victory in the final race of the 2020 season, and what is his last race on a Ducati.

Chaz had a great start, being in second place at the end of lap one and then made his charge on Toprak Razgatlioglu, overtaking the Yamaha rider at turn one on lap two. He then controlled the pace eventually going on to win his 28th race onboard the Ducati. It currently unknown where Chaz will be in 2021, where will the Welshman be next year? And will be on a different manufacturer?

Scott Redding was able to redeem what was looking like a promising weekend until a crash in qualifying halted his momentum. Scott started the race in sixth place on the grid and was behind Jonathan Rea. Scott was in fifth position at the end of lap two, then was promoted to fourth position after Garrett Gerloff suffered a small crash at turn four. Scott was struggling to stay with the top three of Davies, Toprak and Rea, but he had excellent late-race pace and was able to take advantage of a collision between Toprak and Jonathan Rea where Rea crashed and dropped to 16th. Scott then was able to take advantage and close down Toprak and pass him into turn one on lap 19. Scott ends his maiden World Superbike season with a second-place finish and getting a one-two for Ducati.

Toprak Razgatlioglu finished off his incredible weekend with a third-place finish. Toprak was able to take the holeshot once again into turn one but was overtaken by Davies on lap two. He was able to stay with Davies but lost touch of the Welshman after the collision with Rea, he was the overtaken for second by Scott and settled for third place. Toprak has finished the championship in his highest position in fourth. Can the Turkish rider mount a championship challenge next year?

It was looking set for a podium finish for Jonathan Rea catching and staying with Davies and Toprak, but trying to overtake Toprak at turn three on lap nine and fell off his Kawasaki ZX-10RR and dropped to 16th and eventually finished in 14th. Not the way Rea would have liked to have finished the championship, but he’s won the championship so he’ll still be on a high. Because of Rea’s crash, it means that it’s the first time that Kawasaki hasn’t finished on the podium over a weekend since Magny Cours in 2014.

With Jonathan Rea out of serious points contention, Kawasaki’s hopes of winning the manufacturers title were in the hands of his teammate Alex Lowes. Still, disaster struck for Alex as he crashed at turn seven on lap 16 and left the championship in the hands of Xavi Fores. Xavi was able to finish in eighth place and secure the title for Kawasaki by one point.

It’s been a great year of action in World Superbikes in 2020. With some grid shake-ups and rookies having the needed experience can anyone stop Jonathan Rea taking a seventh World Superbike Title in 2021?